Posted on September 1, 2015 by goldstandardairhockey

The 2015 USAA World Air Hockey Championships are scheduled for Oct. 16-18 in Houston, TX! The beautiful TDECU Stadium at the University of Houston is the site for the tournament, which celebrates the 40th anniversary of the U.S. Air Hockey Association, and is the 55th Worlds/Nationals sanctioned by the USAA since 1978! All players from everywhere, of all skill levels, are eligible to compete against the world’s best. The main singles event on Sat./Sun. features quadruple-elimination for most players, with spinoff divisions. Sponsored by Gold Standard Games and other companies, the tournament awards cash, trophies, and other prizes. Players in the main event receive a souvenir T-shirt and every player receives a USAA World Ranking based on finish!

The traditional doubles championship event will take place on Friday. There will be videos and other memorabilia commemorating 40 years of USAA air hockey! Most of the world’s very best players will be attending this tournament – don’t miss it! For more information, go to http://www.airhockey.com. 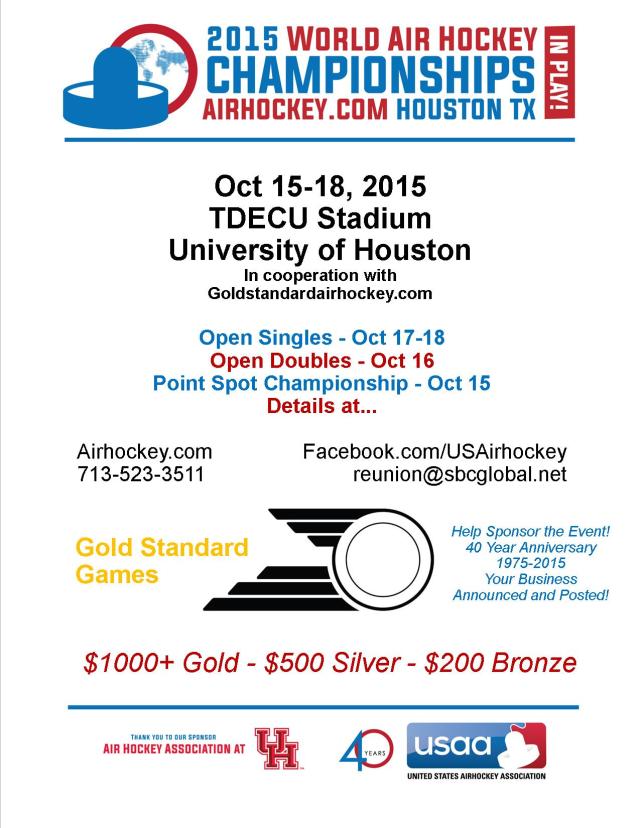